How Does Hookah Actually Work?

An Introduction to Hookah

Hookah is a popular smoking device, through which tobacco can be vaporized, and inhaled through a well of water. Having its roots in ancient Persia, the invention of hookah is widely attributed to the Persian physician Abu Al-fath Gilani in the 16th century. It was invented in the court of Emperor Akbar. Eventually, hookah spread to different continents through various trade routes, slowly becoming a favorite smoking device among people around the world. Today, there are many different types of Hookah (Lebanese, Chinese, Egyptian and Syrian etc.), but they all essentially serve the same purpose.

Side note: Looking for the difference between hookah and shisha (“sheesha”)? We break it down for you in a separate article.

Anatomy of a Hookah Device

In order to understand the inner workings of a hookah device, let’s first take a look at a picture of one: 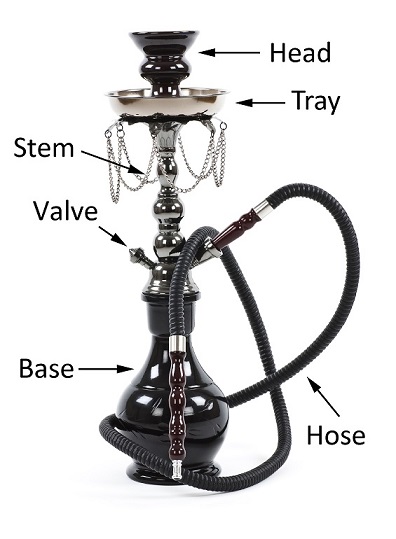 Head: This is the top-most part of the hookah, where the bowl is located. Tobacco is heated and kept in the hookah bowl.

Tray: This is the platform below the bowl, into which ash from the shisha/tobacco falls.

Stem: The narrow pipe or “neck” directly below the bowl, through which smoke is immediately drawn.

Valve: Also called the “purge valve”, this is a one-way gasket in the side of the hookah. It is used to clear smoke from the hose and base after use, so that the flavor doesn’t spoil. The purge valve is activated by blowing air into the hose. Beside the valve, there is a gasket, which is the mechanism preventing smoke from escaping upwards back into the bowl.

Base: This is the bottom of the hookah, which is typically filled with cold water. Smoke passes through the water on its journey out of the hookah, giving it a softer, more refreshing texture.

Hose: This is pipe or “straw” of the hookah, through which smoke is inhaled by the person. Depending on the hookah, it may have multiple hoses, each of which is typically fitted with a mouthpiece.

How Do You Set Up a Hookah?

To set up your hookah, follow the following steps:

To summarize, a hookah device works by allowing the tobacco/shisha burning in the bowl/head of the device to be sucked downward into the base of the hookah, where it is filtered through cold water. This causes the well-known bubbling sound that you’ve probably heard from a hookah! After this, the smoke passes out through hose, and into the person’s mouth and lungs. As the smoke travels through the device, it cannot go upwards back to bowl/head of the hookah, due to a one-way gasket present in the top of its base.

Today, hookah is widely considered to be one of the most satisfying and soothing forms of smoking in various countries around the world, including in the UK. It is often considered to be a relaxing social activity, with lots of “hip” bars and lounges popping up all over Europe dedicated solely to this purpose.

We hope you enjoyed our introductory guide to hookah. If you have any questions, please feel free to let us know!